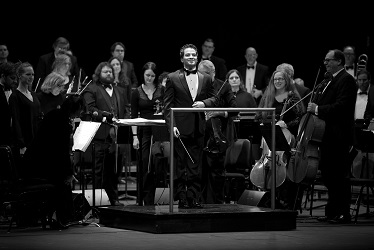 Signature Symphony at Tulsa Community College will begin a national search for a new music director with the announcement that Andrés Franco is leaving in 2020. The 2019-2020 season marks Franco’s fifth and final season with the professional orchestra. This news follows his recent promotion to Resident Conductor of the Pittsburgh Symphony Orchestra and his decision to focus on other aspects of his career.

“While Signature Symphony is thrilled to see Andrés’ success and professional achievement, it also means he will be finishing his tenure with us,” said Kelly Clark, TCC Dean Visual & Performing Arts. “I could not be happier for Andrés as this is a very exciting step in his career and we have been fortunate to have this rising star working with our orchestra for five wonderful years.”

The candidates will also be introduced to Signature Symphony audiences and the Tulsa community during the 2020-2021 season as guest conductors as part of the audition for the music director position. Franco is also expected to return as a guest conductor for future concerts.

“I am very proud of the results we have achieved during my tenure, especially the incredible artistic growth, our interaction with the Tulsa community at large, and our increased visibility at the national level. I look forward to continuing our artistic partnership during the 2019-2020 season and beyond,” said Franco.

“We recognize this upcoming season will be special and I look forward to the continued support as we begin the search for the next great conductor to lead the Signature Symphony,” said Clark.

Season tickets for 2019-2020 are on sale for the Signature Classics and TTCU Pops series. A season subscription offers a substantial savings over purchasing individual tickets. Season ticket prices start at $75. For more information call 918-595-7777.