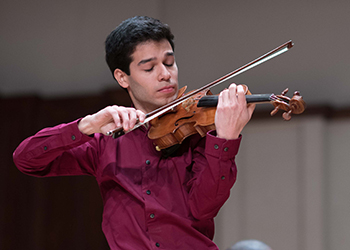 The 2018 Sphinx competition winner, Rubén Rengel, a 22-year-old Venezuelan native will be a featured soloist with Signature Symphony at Tulsa Community College. A violinist, he won first place and received a $50,000 prize in the competition that recognizes and develops classical music talent in the Black and Latino communities.

“Power of Diversity,” sponsored by Williams, will be held at 7:30 p.m., March 16 at the VanTrease Performing Arts Center for Education on the TCC Southeast Campus.

The concert also features Amy Beach’s “Symphony in E minor” (Gaelic), the first symphony written by an American woman and premiered by a major American orchestra.

“Williams is honored to support this performance that celebrates diversity in the arts,” says Geordie Robinson, vice president, Williams Project Management and Signature Symphony Advisory Board member. “Promoting inclusion strengthens our community and helps create an environment where people from all backgrounds are empowered to embrace their unique talents and achieve their goals.”

The public is also invited to attend an Open Rehearsal featuring an interactive experience with Rengel at 6:30 p.m., March 14. The evening is a free community outreach event for music lovers of all ages and begins with a few comments from the guest artist and conductor, then a Q&A session followed by a portion of the rehearsal.

Since its formation in 1979, the Signature Symphony at TCC has been committed to providing rich musical experiences through live performances, as well as music education and community outreach. The Open Rehearsal held on the Thursday evening before every Classics concert is one example.

Tickets start at $12 for adults. Student rush tickets are available one-hour before the performance for $5. For tickets and info call 918-595-7777.