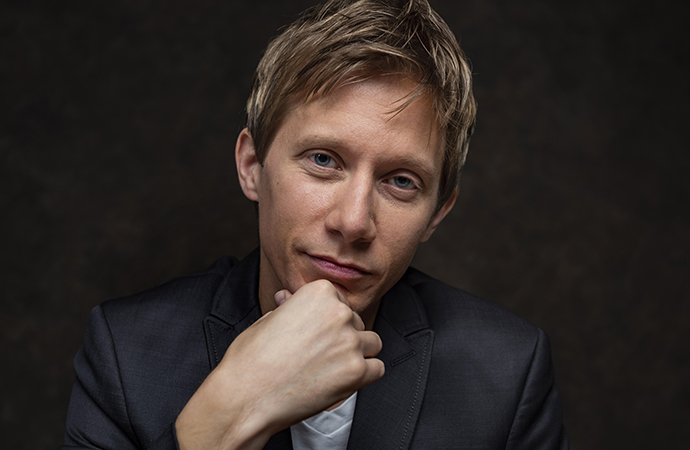 Scott Seaton has been named the next Artistic Director and Conductor for Signature Symphony at Tulsa Community College. The announcement concludes a nationwide search process for the professional orchestra launched in the 2019-2020 season and extended due to COVID.

“It is unbelievable to think our national search started three years ago this summer. To say we experienced a series of challenges is an understatement as we navigated through a global pandemic,” said Kelly Clark, Dean of Visual & Performing Arts at TCC. “As we welcome Scott Seaton to the Signature Symphony family, we are grateful to our musicians, patrons, Signature Symphony Advisory Board members, and the artistic director finalists who made this collaborative journey with us.”

The search process for the new artistic director and conductor saw more than 80 applicants narrowed to three finalists, a global pandemic, numerous changes to season and concert plans, and a finalist withdrawing from consideration.

“Through it all, the Signature Symphony Artistic Director Search Committee was steadfast in getting it right and soliciting input from the community. I also want to thank the members of the search committee who dedicated many hours of work,” said Clark.

Scott Seaton’s dynamic performance style and enthusiasm certainly caught the attention of concert goers and musicians. With an immediate connection to the audience and musicians, Seaton was described as explosive, energetic and powerful with written comments such as “Scott is an exceptional find.” and “He is the type of conductor people will want to come see.”

“The energy he brings to the stage is incredible, but it is his ability to collaborate and listen to us, the musicians, that makes him a wonderful guide through a concert,” said Maureen O’Boyle, Signature Symphony Concertmaster. “By being sensitive to the musicians he’s working with and understanding what we want and need, he can shape a fine performance as he did in April.”

Seaton is in his seventh season as music director of the North State Symphony in Northern California, garnering acclaim for his dynamic performances, innovative programming, and community and youth engagement. Since his international debut in 2007 with the Orchestre Philharmonique du Luxembourg, Seaton has conducted orchestras spanning North America, South America, and Europe. Seaton won the 2011 INTERAKTION competition and was given the opportunity to conduct an orchestra composed of all of Germany’s top orchestras.

He is an enthusiastic advocate of contemporary music, conducting numerous premieres along with curating programs and championing music by living composers. He holds a Doctor of Musical Arts from Université de Montréal, a Master of Music from the New England Conservatory, and a Bachelor of Music from Vanderbilt University. He has also studied at Tanglewood and the National Conducting Institute sponsored by the National Symphony Orchestra.

“I am overjoyed to become the Artistic Director of the Signature Symphony,” Seaton shared. “During my visit in April, I was very impressed with the community support for the orchestra and the warm welcome I was given. The musicians are quite extraordinary and care enormously about the future of the symphony. I’m thrilled to have the opportunity to deepen relationships and expand the Signature Symphony’s connections throughout Tulsa and in the region. Together with the musicians, board, staff, volunteers, and curious and enthusiastic patrons, there is no limit to the possibilities that lie ahead.”

Seaton is only the third artistic director and conductor in the 43-year history of the orchestra. Signature Symphony at TCC includes 70 professional musicians who also teach and coach music students at TCC, other colleges and universities, and various public and private schools and studios throughout the area.

Planning is underway for the 2022-2023 season with an announcement coming later this summer. TTCU Federal Credit Union is a corporate season sponsor of Signature Symphony. In addition, this project is supported in part by the Oklahoma Arts Council, which receives support from the State of Oklahoma and the National Endowment for the Arts.